This project was was put together to demonstrate how old, disregarded electronics could be up-cycled into something much better.

This original 1960’s radio was found in an antiques shop for £3. The original radio was only able to receive LW and MW stations, and used big lead rather large lead based batteries. Not a lot of use now. On connecting a power supply, the original electronics did not work. The original electronics were removed as well as the metal chassis. This would allow sufficient space for all the new electronics. The buttons had to be drilled out and required a good clean: All the parts ready to go back together: The Raspberry Pi is powered by a micro USB port (5v), it does have 2 ports, however these do not provide enough power for speakers, external hard drives etc. To run all the components I chose to use a powered USB hub. I had a an old D-Link usb hub that wasn’t being used. The next job was to amplify the 3.5mm output on the Raspberry Pi to run the speakers. I bought some USB Powered speakers from ASDA with the intention of just using the circuit board wired to the original Roberts speaker, these cost just £7 and where easy to dismantle. Here is the amplifier from the speakers mounted as the top of the case, connected to the 1960’s speaker. Unfortunately the original speaker had seen better days, the sound was awful and they drew too much power leading to the tiny USB amplifier getting hot. I decided to use the ASDA speakers instead. I had to make a new panel from some plywood (painted black to hide behind the grill), here is a before and after: It was then all wired together (more pictures to come). The original ON/OFF switch is connected, the volume knob provided too much resistance but I hope to fix this in the future.

The difficulty came in trying to mount both the Raspberry Pi and usb hub. Both cases were removed but the big USB connectors made it impossible to mount the two boards next to each other. The project also had to be expandable, so it would be easy to connect a keyboard, or a USB flash drive.

In the end I build a frame and then mounted the USB Hub and Raspberry Pi back to back to a sheet to plywood. The wiring is all hidden under this and the USB ports are easily accessible. As you can see a USB WiFi adapter is connected and the two wires at the bottom provide power to the Raspberry Pi and the USB speakers. Here is the radio now.

The Raspberry Pi was originally running OpenElec - a small Linux distribution built from scratch as a platform to turn your computer into an XBMC media centre. This worked okay, but there was a lot of processor “noise” through the 3.5mm jack. It was slo a little slow to respond and was jumpy when streaming media.

I was then told about Volumio, I’ve installed it and I’m really happy with it. The sound quality is much better and I can control it much easier through the IP Gui than the XBMC apps.

I also like the way that if I leave it on an internet radio station, it automatically plays when turned on. The tuning dial had been removed for the power light. I want to get a volume rocker, maybe a clicker on to do it digitally, possibly some form of skip back button as well to go where the tuning dial was.

Very cool. I’ve been trying to do the same but charity shops never seem to have anything useful!

I did something very similar last Christmas, but also added ‘local’ controls via the two knobs and incorporated an LCD screen. 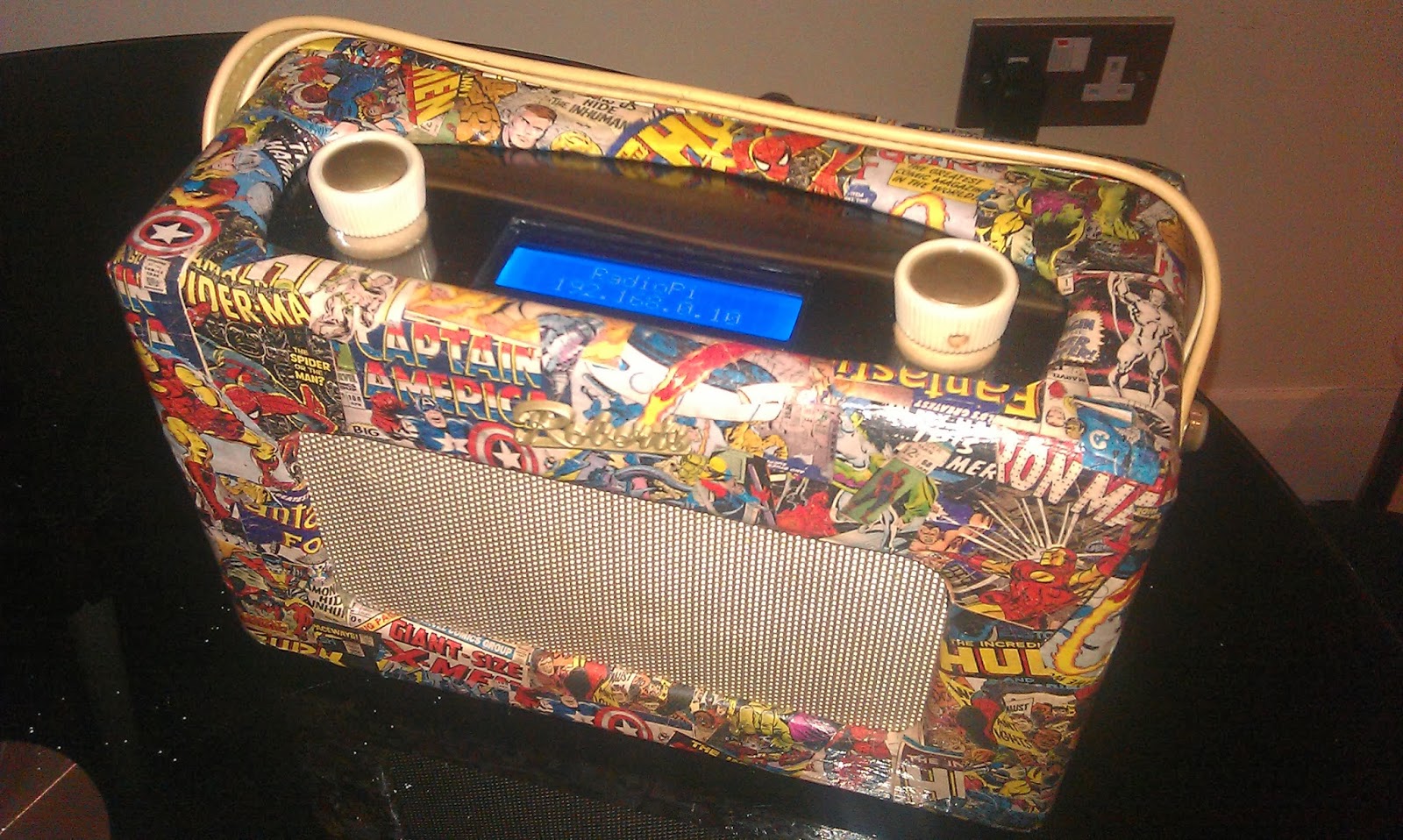