When Leo from Orchard Audio contacted me and asked me if I wanted to take a listen on his new creature, I surely got impressed by his claim to have created an “Ultra High Performance DAC” for the Raspberry PI. So he got me with that, I was extremely curious to see, and most importantly listen, to the ApplePi DAC.

The ApplePi DAC is a dual mono DAC, like we’re used to seeing in the higher-end I2S DAC scene, but unlike the direct competitors that use ESS or AKM based ICs, the ApplePi DAC features two of Burr Brown’s flagship PCM1794A DACs. The DACs are configured in monaural mode achieving a maximum rated 132-dB S/N of the DAC. Some of you might remember that the very same DAC IC was used by Torsten Jaekel in his RPI-DAC (one of the very first I2S DACs made specifically for the Raspberry PI). In this monaural mode, the PCM1794A DAC will offer balanced output. ApplePi DAC features onboard balanced (Mini XLR) and unbalanced (RCA) outputs driven by dual differential output circuit stages, a feature that is certainly appreciated. On paper, the ApplePi DAC should deliver about 132-dB S/N, way higher than the average I2S DAC.

An interesting design choice of the ApplePi DAC is the fact that it does not use crystals to generate a Master Clock (MCLK), as we’ve seen in some DACs with “Audiophile credentials.” Instead it uses a CS2300 IC from Cirrus Logic, which integrates a crystal, PLL, and clock multiplier into a single device. Leo explained to me that he was forced to this design choice because PCM1794A has no way of deriving an MCLK from a crystal, and to get around this issue and still generate a low jitter MCLK, he therefore ended up using the CS2300, and he claims that even though he’s using the Pi’s LRCLK, the jitter from it is reduced to almost nothing, as input jitter is attenuated by 60dB (1/1000).

So, on paper we have a dual mono DAC with impressive S/N, extremely low THD, and a very low jitter clock; the ApplePi DAC looks like one of the all-time best I2S DACs.

But how good is the ApplePi DAC at its job? Immediately after playing my reference tracks, on my main system, something was immediately clear. This DAC excels on all the parameters I love. This DAC is producing the most detailed sound to ever come out of my Raspberry PI, all the subtle nuances of my test tracks were there and clearly distinguished from everything else. Instrumental separation came along with it, and I must admit that in this respect, this DAC outperforms my reference USB DAC (Opera Consonance Don Curzio) which cost a lot more.

The sound signature appears to be positioned on the extremes of the audible band: lower frequencies are very present and bass is quite “punchy,” the same applies for the higher ranges, where you can definitely hear a “bright” approach of this DAC. To make an impolite comparison, this DAC reminds me of the sensations I had when trying Klipsch loudspeakers (and I much more like the “laid-back” English sound, rather than the irreverent Klipsch’s).

Unfortunately, this DAC lacks a bit in PRaT (Pace, Rhythm and Timing), which does not make sense to me: I would have expected it to deliver very good PRaT due to the careful clock design.

All in all, when it comes to detail and instrumental separation this DAC is second to none. However, I would have appreciated a more balanced sound signature: the combination of hyper detail and the “compressed to extreme” sound produces a slight listening fatigue when used in “bright” systems (like my studio one). This effect is greatly compensated for in my main system which is quite “laid back.”

One major disadvantage, coming from the design choice of the DAC IC and clocking mechanism, is that this DAC does not have hardware volume control, so bit-perfect volume control is not available.

My conclusion is that this DAC is for sure one of the best 3 DACs (together with Allo Piano 2.1 + Kali combo and Terra Berry DAC2) for Raspberry PI at the moment. If you’re into hyper detailed sound and your gear can balance the “vivid” sound signature of this DAC, you’ll surely love it.

Thank you for the review.

The ApplePi DAC will be launching via Kickstarter this week, stay tuned for the link.

Also in the future there will be an attachment that will allow hardware bit-perfect volume control.

Here is a pictures of the DAC: My trade mark has been approved by the trademark office.

Check out another review.

The Audio Beatnik:
“Ok, specs are great and all, but how did it really sound? Frankly, very good, surprisingly good.” and “The mid-range and truthiness of the music rivaled that of the other DACs I have on hand that cost significantly more.”

Read the full review at this link:
http://theaudiobeatnik.com/applepi-dac-review-theres-art-in-this-dac-and-it-shows/

My trade mark has been approved by the trademark office.

Glad to hear it!

With only two days into the project we already have more than 50% funding. We are aiming for 500%.

I will be doing a demo of the ApplePi DAC and the CRISPIN amplifier in Long Island, NY on April 28th, There is room for a few more people. If you would be interested in attending send me a PM to get full info.

Now you can get and ApplePi DAC system that is completely ready to go out of the box, and includes a 7" touchscreen. 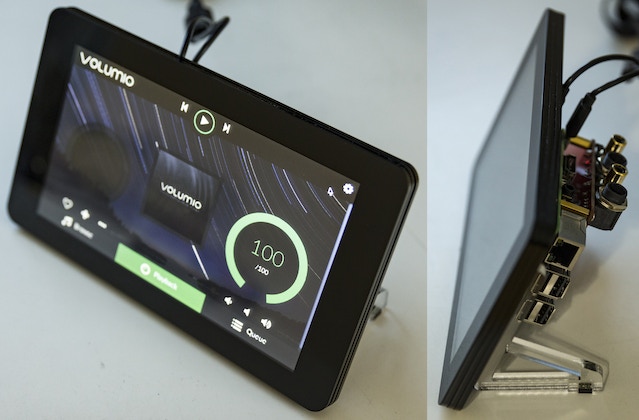 Here is a video showing it in action:
https://youtu.be/WOCduJMGcFU

Get your ApplePi DAC product at a discount.

Only 20 days left in the kickstarter. This is the last time it will be available at this price.

The live demo of the ApplePi DAC and CRISPIN Ultra stereo amplifier will now also be streamed live on YouTube. 04/28/18 @ 2pm EST

In addition to HW volume control this board will also remove jitter from the RapsberryPi’s I2S signals improving audio quality.

The ApplePi Volume-Clocker can be added to any reward level for $79 USD, except for the touchscreen one. It can also be purchased separately for $79. The ApplePi DAC went on a tour around the country. Here is what people who have tried it, have to say:

Wayne - Littleton, CO
“This is a very well engineered and built DAC. I again suggest folks sign up for the tour and listen yourself.” and “I spent a good week listening to it and came away extremely impressed with what Leo has done with this DAC hat.”

Alan - Harrisburg, OR
“I have had the Apple Pie for a while and I must say I am really impressed.” and “Any way this is a dammed fine budget setup that punches way above it’s weight.”

Sharschchandra - Austin, TX
“The build quality is top notch and I really like the layout.” and “The unit sound great out of box, very organic, almost neutral and full bodied (compared to ES9038PRO based DACs). The vocals were amazing especially on the JBL 4312B monitors.”

Jerry - Camarillo, CA
“This is one sweet little Dac, Leo. I actually left work early today just to spend more time getting to listen.” and “You have one helluva nice piece here; I appreciate the gracious demo.”

The tour continues to this day, and will continue beyond Kickstarter. If you would like to sign up, go here: audiocircle.com/index.php?t … msg1665901

Here are some additional specs for the ApplePi DAC:

The DAC will also be available from the volumio shop shortly. Stay tuned for link.

I bought one of the early versions of this DAC that were sent out for review and I have to say I’m very happy with it. The production DACs provide the option of powering RPi and DAC either separately or with a single supply. Mine didn’t give that option so initially I powered the combination with a single iFi iPower supply. I heard a very well-resolved ,spacious and detailed sound with firm bass and extended treble. The downside was that it was just a bit fatiguing to listen to on some material and front-to-back depth was a bit limited.
I then realised that I could power the RPi and DAC separately by stacking my IsolatorPi in between them. The combination of separate supplies and isolation definitely improved things to the point where I was preferring it to my current fave, the Terraberry DAC2. Adding the Allo Kali to the stack was the icing on the cake but of course the cost of that whole combination is then in Katana territory.