Lots of newbie questions about making a player

Hello guys.
I’m a newbie in terms of Raspberry usage but I’ve got an idea to create a player based on the Volumio/Volumio2 Pi 3B+ and I need some help.
I think it would be quite good option to ask all of you to help me to create one complex guide of making a player with all the links to the hardware, software, descriptions and implementation methods.
Of course I can try to find all the info by myself but I thought for a moment that it will be useful to ask for help from the more experienced and qualified members of the community, get as many info as possible on the topic and systematize it all here afterwards for any other people like me.
It is important to remember that despite of me wanting the device sound and work good I also want it as cheap as possible. So – no sacrifices by the means of sound and usability, but preferably without all the unnecessary bells and whistles except the scheme. I suppose such things as Allo’s reclockers and isolators are ones. Some of them supposedly do what can be achieved by cheaper means. The benefits of other of them are quite uncertain – and of course you are free to try to change my mind here.

Here is a simplified scheme of what I want to achieve:
[spoiler] 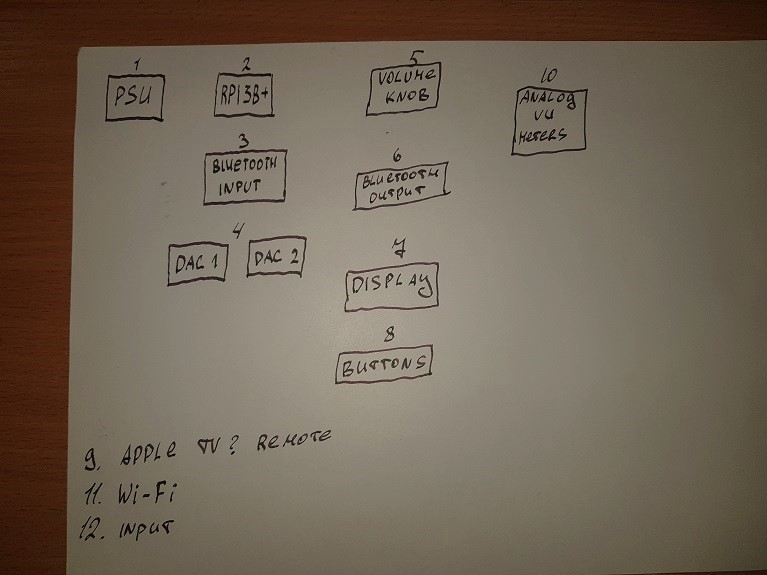 where to post images[/spoiler]
And here are the questions:

Are there any ways of using these?

What is preferred to be installed between the power socket and the transformer (fuses, filters, something else)?

Which devices to use for AC-DC conversion and regulation (links appreciated)? There’s bunch of cheap Chinese converters on ebay/aliexpress but all of them want to get no more than 25V to the input what leaves me with some unused lines or even unused transformers. Are they suitable in general/ Are there some ways of modding them to use with higher input voltage?

I suppose all the electricity transforming stuff should be grouped in one part of the device and all the recipients in another, groups shielded to avoid some EM interference. Is it really so and if it is how to shield them properly?

If the Raspberry is powered from the linear PSU, do we have a difference speaking of the sound quality if the DAC gets the power directly from a separate PSU line or from the PI?

Where should I get the power for all the should-be-powered things such as control knobs and buttons, displays etc.?[/spoiler]
2. Raspberry PI 3B+
[spoiler]Not much to ask here at the moment. A PI 3B+ with Volumio/Volumio2 installed on it.[/spoiler]
3. Bluetooth input
[spoiler]A method of making the device able to get the audio via Bluetooth, e.g. from a cellphone, laptop etc. and outputting it to the speakers with no to minimum quality loss (as I understand all the losses would happen already on the sending device as soon as it is sent over Bluetooth instead of hard wire).[/spoiler]
4. DAC
[spoiler]I want to connect two different DACs to one raspberry, not to be used simultaneously. I’m thinking of this product:
store.ncd.io/product/i2c-cross- … ni-module/
Will this work? Are there simpler/cheaper methods of achieving my target, e.g. some two-position selector switch on the I2C output line choosing one of the two possible output lines?

In terms of having two DACs – how to correctly wire them both to just one pair of output sockets?

Are the I2C DACs hot swappable in general or is there a necessity of turning the device’s power off before swapping a DAC.

And of course I need some advice on what DACs to use in general. I want to get my hands on two ones or more, sounding good but different. I plan to listen to all music genres – classics, jazz, hip-hop, all the variety of electronics, some extreme hardcore technical death metal etc. This is the reason of me having the idea of getting at least two different DACs because I hardly believe that there’s one piece of hardware capable of all the tasks.[/spoiler]
5. Volume regulation knob
[spoiler]Regulating the volume of the active DAC output with a knob and making it to be understood by the software to correspond with the Volumio’s volume gage.[/spoiler]
6. Bluetooth output
[spoiler]A way to output the sound to a Bluetooth acoustics with minimum quality loss.[/spoiler]
7. Display
[spoiler]Some OLED display on the front panel showing the <Artist – Track name> info and the volume level when it is being messed with using the knob or remote.[/spoiler]
8. Control buttons
[spoiler]Control buttons on the device’s front panel. Turning the system on/off, play/pause, stop, previous/next track. Any ways of turning on/off shuffle through all the folders of my entire library.[/spoiler]
9. Remote
[spoiler]A way to organize a remote control via the Apple TV remote or some other suitable remote pad. Turning the system on/off, play/pause, stop, previous/next track, volume up/down. Any ways of turning on/off shuffle through all the folders of my entire library.[/spoiler]
10. Analog VU meters
[spoiler]Two separate VU meters for the left and right channels on the front of the device, measuring output signal levels.[/spoiler]
11. Wi-Fi
[spoiler]Any ways of modifying the PI 3B+ to have an external Wi-Fi antenna.[/spoiler]
12. Analog input
[spoiler]Input from a phone or cd player through minijack or 2x RCA sending the signal through active DAC.[/spoiler]
13. On/off switching procedures
[spoiler]A way to turn the system on/off and then shutting it down to standby using both a remote or a pushbutton instead of just simply cutting the power off leading to Volumio not able to boot up after the power is restored.[/spoiler]
14. Source selector.
[spoiler]A physical selector of the source of the signal – Internal storage/external USB/AUX input/Bluetooth input.[/spoiler]

And finally – the amplifier for connecting it to passive acoustics. Should I even look at cheap (~$200) Chinese tube ones? Can I find something good to install it inside my device and get an already amplified signal? Are there any cheap amplifiers you know about?

Thanks for your help.